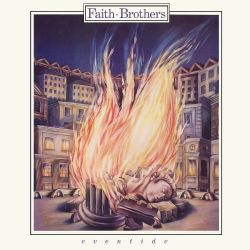 SKU: CDBRED577
Categories: 10.95, Cherry Red Records, Cherry Red Sale, Physical, Sitewide Sale
Share:
Description
Fronted by talented songwriter Billy
Franks and his lifelong friend from Fulham Court, Lee Hirons, the Faith
Brothers were one of the most hotly-tipped bands of 1985. Their impassioned
brand of blue-eyed soul attracted comparisons with The Style Council and the
Spencer Davis Group while their socialist views linked them in the media with
the likes of Billy Bragg and the Redskins.
Eventide was the Faith Brothers’ debut album, issued on Siren Records in
1985. It reached the Top 75 and included the singles ‘Eventide’ and ‘Whistling
In The Dark’ but omitted by their popular radio hits from earlier that year,
‘Country Of The Blind’ and ‘A Stranger On Home Ground’.
Amazingly, Eventide has never before been issued on CD!
This deluxe 2-CD set expands the original 11-track
album with a bonus disc of 15 further tracks, adding those missing singles as
well as their pre-Siren indie debut ‘A Tradesman’s Entrance’ and a demo version
of ‘Newtown’ which graced a flexidisc free with Jamming! magazine.
The Faith brothers were championed by Jamming!’s
editor Tony Fletcher, who eventually became their manager. Now a successful
author (Keith Moon, The Smiths, REM), Tony has written a heartfelt foreword for
this long-overdue reissue.
Compiled with the help of Billy and Lee (and
remastered with TLC by Lee), this 2-CD expanded edition boasts re-mastered
music as well as a splendid, annotated booklet boasting rare photos and
extracts from Billy’s hilarious yet touching autobiography A Far Cry From Sunset.