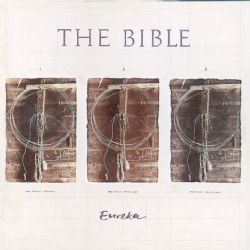 SKU: CDBRED531
Categories: 10.95, Cherry Red Christmas Sale, Cherry Red Records, Physical, Sitewide Sale
Share:
Description
Formed in 1985 from the ashes of The Great Divide,
The Bible featuring Boo Hewerdine and Kevin Flanagan.
The band
released the mini-LP Walking the Ghost Back Homein 1986, giving them a top-ten hit on
the UK
Independent Chart,This
was followed by the first release of ‘Graceland’ as a single, which gave them a
minor hit in the UK, The album was well received by music pundits, and this brought the
band to the attention of Chrysalis Records.
In January 1988, the band’s second album,Eureka produced by Steve Earle, was released to great critical acclaimand spawned a number of great singles, which
had some limited chart success. Despite this the band soon split up afterwards
with them persuing solo careers
This timely re-issue comes with newly re-mastered
sound, and adds all the available B-Sides from the era. Boo Hewerdine has
contributed comments to sleeve note writer Mojo’s Daryl Easlea to make this a
must have package for all fans of the Bible and Boo Hewerdine.