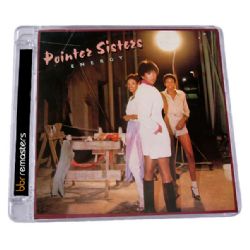 SKU: CDBBR0105
Categories: 9.95, Big Break Records, Physical, Sitewide Sale
Share:
Description
·
The Pointer
Sisters trail blazed a unique path for themselves working with genres as
diverse as funk (Yes We Can Can, How Long), jazz/vocalese (Steam Heat,
Cloudburst) and country (Fairytale), all on Blue Thumb Records. Bonnie Pointer
left the group in 1976 and the remaining trio of Ruth, Anita and June Pointer
eventually signed with Richard Perry’s fledgling label Planet Records. Impressed by their unique ability to fit
their vocals into any genre Perry decided to fashion the sisters an album of
innovative new arrangements of lesser known compositions by the rock fraternity.
·
ENERGY bowed in
late 1978 and was quickly certified gold making US Pop #13 & R&B #9 in
the process. The album was preceded by their cover of Bruce Springsteen’s FIRE
which became their first gold single. FIRE made #2 on the Hot 100 as well as
hitting the #1 spot in the Netherlands, South Africa and New Zealand.
·
EVERYBODY IS A
STAR (Sly and The Family Stone) was chosen as ENERGY’s first UK single where
the sisters made their debut performance on Top Of The Pops performing the hit
song.
·
HAPPINESS saw
the group returning to the repertoire of Alan Toussaint after charting hits
with his “Yes We Can Can” and “Going Down Slowly” earlier in the decade. The single made the top 20 of both the
R&B and Disco charts in the US in 197.

·
ENERGY also
features songs originally recorded by Steely Dan (Dirty Work), Fleetwood Mac
(Hypnotized), Redbone (Come And Get Your
Love) and The Doobie Brothers (Echoes Of Love) and further enhanced the
Pointers reputation of being one of the most versatile vocal acts the music
industry has ever known.

·
Newly remastered and released in deluxe Super Jewel cases with bonus
tracks and brand new interviews, ENERGY is a must for all Rock, Soul and Pop
fans out there!