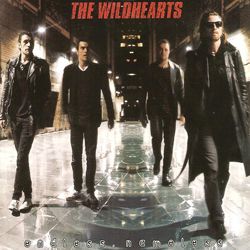 Released on 27/09/10. Released under the Mushroom Records label back in October 1997, the Endless, Nameless album caused a huge stir amongst Wildhearts fans, due to its distorted sound and white noise mixing. The album produced two sets of singles, Anthem and Urge . The track Anthem sported Danny McCormack as lead vocalist for the first and only time. Abandoning past sound in favour of an almost industrial punk style, the Wildhearts hid ten gorgeous pop songs behind infinite layers of noise. ‘Anthem’ and ‘Pissjoy’ emerge as tunes first, with the kind of choruses which would guarantee chart success if you could only make them out.

But the production, is utterly fantastic. The songs are still undeniably of the same breed as ‘I Wanna go Where The People Go’ and ‘Sick of Drugs’, but are elevated to even greater heights by the production. It’s never gratuitously noisy. The songs were made to work with the production. It’s perhaps the most innovative and misunderstood masterpiece of the nineties. And nobody has even come close since.

This 2 CD collection contains all the b-sides from the era housed in a slipcase, the booklet contains notes by Classic Rock’s Dave Ling and extensive artwork with photos and memorabilia from the era, all approved by Ginger himself.

Disc One - Junkenstein / Nurse Maximum / Anthem / Urge / Pissjoy / Soundog Babylon / Now Is The Colour / Heroin / why You Lie / Thunderfuck / Disc Two - b-sides Anthem- So Good To Be Back Home / Time To Let You Go / White Lies / The Song Formally Known As? / He's A Whore / B-Sides Urge- Fugazi (Do The Fake) / Kill Me To Death / Zomboid / Genius Penis / Lost Highway