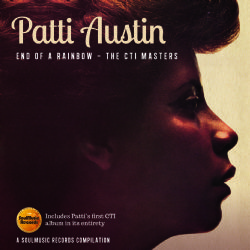 End Of A Rainbow – The CTI Masters
Patti Austin

While Grammy-winning song stylist Patti Austin enjoyed her first experience of mainstream international chart success in the early ‘80s (with hits such as ‘Baby Come To Me’ and ‘How Do You Keep The Music Playing?’ with James Ingram) , the New York-born singer had been recording for well over a decade scoring her first chart hit as a teenager in 1969. It was after she signed with Creed Taylor’s CTI label in 1976 that she began making albums that established her as a fixture in contemporary music.

Patti’s debut for CTI, END OF A RAINBOW was conceived after she played demos of songs she’d written (but originally never planned to record) for arranger Bill Eaton who in turn played them for his production partner percussionist Ralph MacDonald. After MacDonald let Creed Taylor hear some of the songs, Patti began recording what would become her much-acclaimed debut set for the label which featured eight original Austin compositions including the U.S. R&B charted single, ‘Say You Love Me’ and ‘Sweet Sadie The Savior’ (also recorded by Blood, Sweat & Tears). The 1976 LP (with some of New York’s top session players) became a U.S. Top 40 jazz charted album and is included in its entirety on this SoulMusic Records’ compilation drawn from Patti’s four years with CTI.

Renowned as an in-demand jingle singer and session vocalists in New York, Patti went on to record one ‘live’ and two more studio albums for the label. Included on this collection are six tracks from 1978’s HAVANA CANDY and three from the 1980 LP, BODY LANGUAGE. Includes notes by SoulMusic.com founder David Nathan with quotes from the interviews he’s done with Patti since 1976.