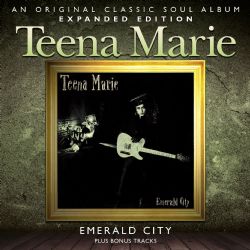 The late, great TEENA MARIE had established herself as a consistent hitmaker as a result of five albums for Motown; after signing with Epic Records in 1983, the multi-talented singer, songwriter, producer and musician released Robbery (reissued by SoulMusic Records in 2012 as an expanded edition, SMCR-5047) following it with her breakthrough 1984 set Starchild (which contained the major hit single, ‘Lovergirl’ (reissued by SoulMusic Records as an expanded edition (SMCR-5048).

The 1986 critically-acclaimed set EMERALD CITY (a US Top 20 R&B best-seller), had a distinctly different flavour from its predecessor: considered more of a concept album from a lyrical standpoint, the eight-track set showcased Teena’s expressive creativity as a songwriter with original compositions like ‘Lips To Find You,’ ‘Shangri La,’ ‘Love Me Down Easy’ and ‘Sunny Skies.’

This expanded edition of EMERALD CITY features six bonus cuts including two tracks from soundtracks to which Teena contributed, ‘Lead Me On’ (from “Top Gun”) and the dance hit ‘14K’ (from “The Goonies!).

Essay by renowned US writer A. Scott Galloway include quotes from key players involved with the project.

2.
ONCE IS NOT ENOUGH

7.
LOVE ME DOWN EASY

10. LIPS TO FIND YOU (US Instrumental)