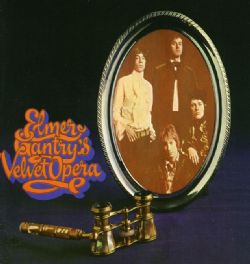 ·
On the face of it, Elmer
Gantry’s Velvet Opera should have been a shoo-in for success.  A popular, dynamic live act who were equally
at home in the studio, their early recordings were bursting with wit,
intelligence, melody, style and, perhaps more than anything else, a sense of
fun.

·
The sole album to be made
by the original line-up, Elmer Gantry’s
Velvet Opera was one of the most original and consistently entertaining
albums to emerge from the British psychedelic scene.  The band also cut a couple of hugely
commercial singles – and yet, somehow, the glittering prizes eluded them (although
Elmer did subsequently score a hit as the lead singer on Stretch’s ‘Why Did You
Do It’, while rhythm section Richard Hudson and John Ford would later flourish
in the Strawbs before branching out on their own) .
·
This definitive release of
that self-titled 1968 album adds their three contemporaneous singles (including
the minor hit ‘Flames’, an EGVO song that the embryonic Led Zeppelin included
in their live set), various studio outtakes (such as their title song to the
little-known 1967 Swinging London horror movie short Talk Of The Devil) as well as hitherto-unreleased early demo
versions of ‘Flames’ and ‘Salisbury Plain’.
Available 21/10/2013
Additional information
Tracklist
Reviews (0)