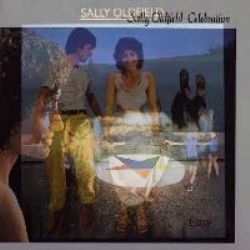 Some artists are, unfortunately, forever fated to remain in the shadow of particularly talented or accessible siblings.  Sally Oldfield, sister of the legendary Mike Oldfield, is one of these acts. Despite the pair performing together as The Sally angie during the late 1960s, it was a solo career which sent Mike into the stratosphere and, to some degree, left Sally to find her own way.  After spending some time in the 1970s working in experimental fields of music, and although somewhat overshadowed by the success of Mike and his Tubular Bells phenomenon, in the late 70s and on into the 1980s Sally carved out a notable career for herself, originally on Bronze Records, who issued her debut album, Water Bearer and were suitably impressed to release both 1979 s follow up, Easy, and the following year’s Celebration.  Folk tinged easy listening pop, drenched in sunshine and woozy with white wine, Oldfield’s material also offers a darker side, and never seems far from pain. Her wandering tales of love and lustare orchestrated with incredible late 70s clarity, and both albums are very much prime examples of this time and place, as evidenced by the occasional ventures towards disco, epic,overblown ballads and even reggae. Oldfield’s voice remains strong and light throughout, and the obvious attention to detail in both the song-writing and the records production shines through.  Both albums have long been out of print, and are presented herewith detailed liner notes and both original artwork and original tracking orders restored.

Notice: id was called incorrectly. Product properties should not be accessed directly. Backtrace: require('wp-blog-header.php'), require_once('wp-includes/template-loader.php'), include('/themes/xstore/woocommerce/single-product.php'), wc_get_template_part, load_template, require('/themes/xstore/woocommerce/content-single-product.php'), do_action('woocommerce_after_single_product_summary'), WP_Hook->do_action, WP_Hook->apply_filters, woocommerce_output_product_data_tabs, wc_get_template, include('/themes/xstore/woocommerce/single-product/tabs/tabs.php'), wpb_new_product_tab_content, WC_Abstract_Legacy_Product->__get, wc_doing_it_wrong Please see Debugging in WordPress for more information. (This message was added in version 3.0.) in /home/cherryredco/public_html/wp-includes/functions.php on line 4986
1.THE SUN IN MY EYES 2. YOU SET MY GYSPY BLOOD FREE 3. ANSWERING YOU 4. THE BOULEVARD SONG5. EASY 6. SONS OF THE FREE 7. HIDE AND SEEK 8. FIRSTBORN OF THE EARTH 9. MAN OF STORM 10. MANDALA 11. MORNING OF MY LIFE 12. WOMAN OF THE NIGHT 13. CELEBRATION 14. BLUE WATER 15. MY DAMSEL HEART 16. LOVE IS EVERYWHERE
Reviews (0)