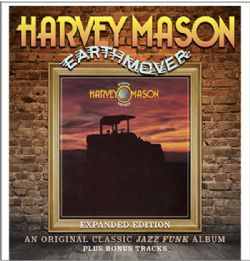 As part of its jazz-funk series, SoulMusic.com Records is proud to present the third CD in the series of five reissues of the complete Arista catalogue of renowned, Grammy-winning star drummer, performer, producer and songwriter Harvey Mason.

Originally released in 1976, EARTHMOVER was Harvey’s second LP for Arista, the follow-up to MARCHING IN THE STREET (SMCR 5015).  Primarily an instrumental album (with the exception of the funky ‘Sho Nuff Groove,’ co-written with Louis Johnson of The Brothers Johnson and featuring Harvey on lead vocals), EARTHMOVER’s star players include Patrice Rushen, Greg Phillinganes, Ray Parker Jr., The Seawind Horns, Anthony Jackson and Merry Clayton on background vocals.

The ‘live’ track, ‘When I’m With You’ features famed Motown bass player James Jamerson while renowned keyboardist Jan Hammer plays on and co-wrote the fusion standout ‘No Lands Man’. Produced by Harvey, the album spawned the single ‘K.Y. And The Curb,’ included as a bonus track on this expanded edition along with the UK-only single edit of the funky rare groove cut, ‘The Mase’ – which became Harvey’s music biz nickname.