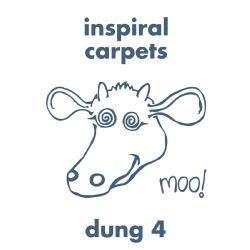 •    THE INSPIRAL CARPETS – along with the Stone Roses and the Happy Mondays – made their name as part of the whole ‘Madchester’ scene, with a string of classic singles and a lucrative line in iconic T-shirts.

•    Between 1989 and 1995, the band notched up 15 hits and four Top 20 albums before disbanding. In 2003, they re-formed and have been playing sporadically ever since. In 2011, they reunited with original singer Stephen Holt and are now working on a brand new album for Cherry Red – their first for two decades.

•    Back in mid-1989, after the Inspirals had launched their own Cow label, they released the mail-order cassette DUNG 4. This album’s worth of demos had been recorded around New Year’s 1987, boasting unique songs as well as versions of tracks which they later re-recorded. Dung 4 went on to sell some 8,000 copies but has never been reissued on vinyl or CD.

•    Officially sanctioned by the Inspirals and remastered with help from their organist Clint Boon, Dung 4 is now expanded with the addition of four tracks from their earlier demo tape, Cow, recorded in May 1987.

•    The band will be properly supporting this release with radio and press interviews, etc.