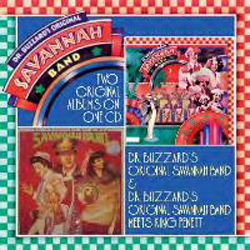 Dr. Buzzard’s Original Savannah Band were one of the most original sounding outfits of the Disco era. A skillful blend of big band , Hollywood styled strings, swing influenced grooves and for 1976, modern rhythm and percussive techniques aimed directly at the dance floor.

They played around New York City and upstate usually dressed in cool 40’s gangster garb; doubled breasted suits and fedora hats. They made a huge impact on clubs around the world and became regulars at Studio 54, New Yorks premier club and were feted as one of the new genres most creative practioners.

In 1979 Cory Daye left the group to pursue a solo career, teaming up with Sandy Linzer for the album Corey & Me and in 1981 August Darnell and Coati Mundi formed Kid Creole & The Coconuts, who enjoyed phenomenal success in Europe during the early 80s. Their third album, 1982’s Tropical Gangsters, with the album reaching No.3 staying on the album chart for 40 weeks and all their singles top 10 hits in the UK.