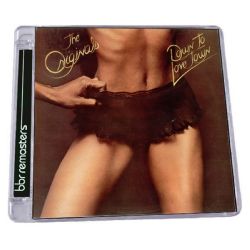 Down To Love Town: Expanded Edition
Originals (The)

•    Formed in 1966, THE ORIGINALS worked as studio backup singers at Motown and featured on tracks such as ‘What Becomes Of The Broken Hearted’ by Jimmy Ruffin, ‘For Once In My Life’ by Stevie Wonder and Edwin Starr’s politically fuelled jam, ‘War.’ The original Originals were made up of four singers, the group’s baritone and founder Walter Gaines, tenors Hank Dixon and C.P. Spencer (an original member of The Spinners) and also bass singer, Freddie Gorman, who was one of the writers of ‘Please Mr. Postman.’ In the late 60s, under the guidance and writing expertise of Al Green, The Originals scored two of their biggest hits early in their career with ‘Baby I’m For Real’ and the Gold certified, ‘The Bells.’

•    DOWN TO LOVE TOWN was the groups eighth album for Motown and was released in 1977. Produced by Michael Sutton and the Originals The album opens with intent on the horn and wah-wah led Disco/Soul stomper ‘Hurry Up And Wait’ before making way for the title track and only single from the album. ‘Down To Love Town’ (Disco #1/Pop #47) was originally included on their 1976 album Communique and became a true Disco classic with an incredible and impassioned lead vocal from Freddy Gorman’s tenor/baritone, as he demands everybody join him in ‘Love Town,’ while the interplay between the guitar, strings and percussion keep you on the crest of the wave for the full six minutes of this 12” remix.  Other standouts include the smooth up-tempo groover ‘You Are A Blessing To Me’ and the passionate ballad ‘Sunrise.’

•    Following on from their reissue of The Originals Lamont Dozier produced 1975 album “California Sunset,” (CDBBR0044) BBR are proud to present DOWN TO LOVE TOWN, expertly remastered and complete with extensive liner notes and bonus tracks. Essential listening for all R&B, Soul, Funk and Disco fans.

1. HURRY UP AND WAIT

3. YOU ARE A BLESSING TO ME