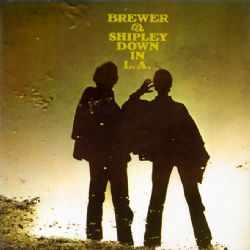 Down in L.A.
Brewer & Shipley

SKU: CRNOW32
Categories: 9.95, Now Sounds, Physical, Sitewide Sale
Share:
Description
A few years before they took that one toke over the line, BREWER & SHIPLEY were hard working staff songwriters for A&M Records’ publishing subsidiary, Good Sam Music. The duo soon after secured a recording contract with A&M,
and their debut LP, Down In L.A., was issued in October 1968.
Sounding like a hybrid of the psychedelic country rock of Sweetheart Of The Rodeo-era Byrds, and the studio experimentation of Curt Boettcher’s Millennium/Sagittarius projects, Down In L.A. is finally now being issued on CD for the first time ever.
Coproduced by JERRY RIOPELLE (Phil Spector, The Parade, Beau Brummels), Down In L.A. showcases the talents of many Wrecking Crew members, including Leon Russell, Hal Blaine, Jim Messina, and Jim Gordon.

SOURCED FROM THE ORIGINAL MASTER TAPES.

2. SHE THINKS SHE’S A WOMAN

7. AN INCREDIBLE STATE OF AFFAIRS

8. KEEPER OF THE KEYS