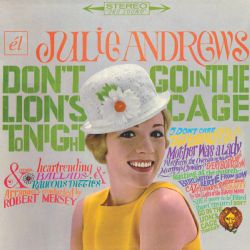 SKU: ACMEM287CD
Categories: 9.95, El, El Records Sale, El! Christmas Sale, Physical, Sitewide Sale
Share:
Description
• At the commercial height of her career in the 1960s, Julie Andrews could claim to be the primary performer associated with the longest-running musical in Broadway history, the highest-grossing Hollywood film ever made, and the biggest-selling album of all time.
• Possessor of a “pure, white, thin” four-octave range voice, Julie sang at a Royal Command Performance at just thirteen. Before she was twenty, she achieved Broadway stardom, playing lead roles in The Boyfriend and My Fair Lady. She won an Oscar for her first film, Mary Poppins, and the worldwide affection of millions for her second, The Sound of Music.
• The Mary Poppins soundtrack LP adorned with the songs which for many define their 1960s childhoods – Chim Chim Cher-ee, A Spoonful of Sugar, Jolly Holiday, Supercalifragilisticexpialidocious – topped the Billboard chart for more than three months, at the time outselling Elvis, The Beatles and The Rolling Stones.
• The Sound of Music followed in 1965, eclipsing even Gone With the Wind at the box office. The soundtrack LP sold an extraordinary 15 million copies earning Julie royalties in excess of the fee she received for acting in the film.
• Sandwiched between the Julie Andrews Shows she made for British and American television from the tail end of the fifties and Mary Poppins (which was filmed in 1963) Andrews recorded the two, most distinctive solo albums, that are the centrepiece of his presentation. Don’t Go In the Lion’s Cage Tonight features favourite British music hall songs performed by Julie in the classic style, while Broadway’s Fair is devoted to her choice of show tunes from such productions as West Side Story, Wonderful Town and Paint Your Wagon.
• Extras: Three great Andrews numbers from her Broadway debut, the 1954 production of Sandy Wilson’s The Boyfriend; The title track, I Could Be Happy with You and A Room in Bloomsbury, and to close the set, Julie singing the eternal Wouldn’t It Be Loverly? from My Fair Lady.
N.B. This title is released 20th April and will not be dispatched before this date.

Track Listing:
DON’T GO IN THE LION’S CAGE TONIGHT
(Heartrending Ballads & Raucous Ditties)
1. I DON’T CARE
2. THE HONEYSUCKLE AND THE BEE
3. MOTHER WAS A LADY AND IF JACK WERE ONLY HERE
4. WHO THREW THE OVERALLS IN MISTRESS MURPHY’S CHOWDER?
5. EVERYBODY’S DOIN’ IT NOW
6. WAITING AT THE CHURCH (MY WIFE WON’T LET ME)
7. DON’T GO IN THE LION’S CAGE TONIGHT
8. BURLINGTON BERTIE FROM BOW
9. ALEXANDER’S RAGTIME BAND
10. BY THE LIGHT OF THE SILVERY MOON
11. SMARTY
12. SHE IS MORE TO BE PITIED THAN CENSURED
BROADWAY’S FAIR
13. LOOKING FOR A BOY (From Tip Toes)
14. HOW LONG HAS THIS BEEN GOING ON (From Rosalie)
15. I FEEL PRETTY (From West Side Story)
16. A SLEEPIN’ BEE (From House Of Flowers)
17. BAUBLES, BANGLES AND BEADS (From Kismet)
18. HOW ARE THINGS IN GLOCCA MORRA? (From Finian’s Rainbow)
19. A LITTLE BIT IN LOVE (From Wonderful Town)
20. THIS IS NEW (From Lady In The Dark)
21. A FELLOW NEEDS A GIRL (From Allegro)
22. HOW CAN I WAIT (From Paint Your Wagon)
23. I DIDN’T KNOW WHAT TIME IT WAS (From Too Many Girls)
24. IF LOVE WERE ALL (From Bitter Sweet)
THE BOYFRIEND
25. THE BOYFRIEND
26. I COULD BE HAPPY WITH YOU
27. A ROOM IN BLOOMSBURY
MY FAIR LADY
28. WOULDN’T IT BE LOVERLY?
Additional information
Tracklist
Track listing as above.
Reviews (0)