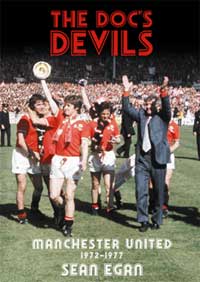 Tommy Docherty led Manchester United through one of the most interesting periods in their history. Employed in late 1972, the former Scotland manager led the club on an amazing journey, taking in a successful relegation battle, relegation itself, instant promotion and two successive Cup Finals, all in just four and a half years, and the nature of his eventual sacking, following allegations about his private life, gives some indication of the complicated, less than perfect man ‘Doc’s Devils’ seeks to unveil.

Docherty’s unconventional, and at times controversial, approach to team affairs and man management is explored on a season by season basis, whilst numerous interviews from those who worked with and played under him, including legends of the era such as Brian Greenhoff and Sammy McIlroy, ensure that no stone is left unturned in this tale of the highest highs and lowest lows the great game has to offer. These first hand accounts really make ‘Doc’s Devils’ the definitive account of this period, and the book is a must read for any serious United fan, whilst the author’s ability to maintain a degree of neutrality rarely found in such biographies will also encourage followers of teams outside of the red half of Manchester to persist with this incredible footballing story.

In addition to The Doc’s story, ‘Doc’s Devils’ also looks at the post United careers of those who played in his sides and who came to love and loathe him in equal measure. It also includes a full matchography for the period,

‘Doc’s Devils’ is an extremely informative and thorough account of ‘The Doc’s’ spell at this world famous football club, which still employed the Holy Trinity of Law, Best and Charlton during his tenure. The book overflows with the degree of insight and documentation which only the most vigorous research can uncover, and author Egan’s thorough, investigative approach is matched only by the quality of his writing.

Sean Egan is a music and sports journalist, and has written for Billboard, Classic Rock, Record Collector, RollingStone.com, Sky Sports, Uncut and Vox, amongst others. His ‘Jimi Hendrix And The Making Of Are You Experienced’ title sold in vast quantities and was nominated for an Award for Excellence by the Association for Recorded Sound Collections, and he has also written a critically acclaimed novel, ‘Sick Of Being Me’.