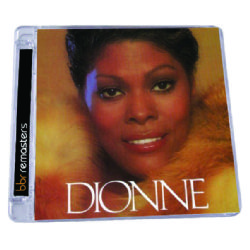 SKU: CDBBR0176
Categories: 9.95, Big Break Records, Physical, Sitewide Sale
Share:
Description
Dionne Warwick
is a legendary American vocalist, she’s also Whitney Houston’s cousin.
Throughout her career she’s released over fifty albums, won five Grammy’s and
been nominated for a further seven as well as getting over thirty top 40
R&B hits.
DIONNE,
released in 1979 on Arista, was produced by Barry Manilow who also provides
backing vocals and piano on a number of songs. Gene Page also makes an
appearance orchestrating four of the songs.
I’LL NEVER
LOVE THIS WAY AGAIN saw Dionne reach the #5 spot in the A.C. and Pop charts as
well as reaching #18 in the R&B chart. This is still a staple in her sets
to this day.
DÉJÀ VU was
co-written by Isaac Hayes and reached the number one spot in the A.C. chart as
well as gaining Dionne the R&B #25 and Pop #15 positions. Both this and
I’LL NEVER LOVE THIS WAY AGAIN gained Dionne Grammy awards for Best R&B
Vocal Performance.
AFTER YOU was
the final single release which saw Dionne get her third A.C. top ten in a row
as well as reaching R&B #33 Pop #65.
Released in a deluxe Super Jewel case with bonus tracks, DIONNE is a
must for all Soul, Funk and Jazz fans out there!