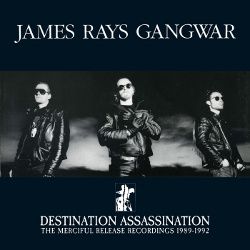 As well as extensive liner notes based on new interviews with James Ray, this release of ‘Destination Assassination – The Merciful Release Recordings 1989-1992’ includes many rare and previously unreleased demo recordings, available on CD for the first time.

James Ray made his sonic debut topping the indie charts in January 1986; singing lead vocals on ‘Giving Ground’ by The Sisterhood, a short lived spin-off from Leeds’ favourite sons, The Sisters Of Mercy.

Signing to The Sisters Of Mercy’s own Merciful Release record label, James Ray And The Performance released three cult EPs between 1986 and 1989, before James Ray left to form James Rays Gangwar at the end of 1989.

Making an immediate impact with their visceral live shows, and taking a far more rock orientated approach than the industrial/dance/rock hybrid pursued by The Performance, Gangwar released ‘Another Million Dollars’, backed by ‘Hell Blonde Chiara’, at the end of 1989.

“Without Conscience’ backed with ‘Destination Assassination’ was released by Merciful Release on 12” in 1990, and continued many of the themes developed by The Performance, but with a more brutal, and aggressive guitar based attack, joining the samples, sequencers and relentless drum machine.

James Ray finally issued his full-length debut album in 1992 with “Dios Está De Nuestro Lado” (Spanish for ‘God is on our side’), kicking off with the seven minute single, ‘Rev Rev Lowider’, an electronic ‘Born To Be Wild’ for the end of the millennium.

Inevitable comparisons were made with label boss Andrew Eldritch and The Sisters Of Mercy, but fans and critics alike were at last recognizing the singer’s unique talent, with positive press from everyone from Melody Maker to The Times.

As well as extensive liner notes based on new interviews with James Ray, the release includes many rare and previously unreleased demo recordings, available on CD for the first time.

FOR FANS OF: THE SISTERS OF MERCY, MINISTRY, SUICIDE…