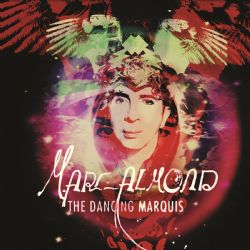 •    In 2013, Marc Almond realised the ambition of a lifetime when he attended a few recording sessions with the legendary record producer Tony Visconti, famous for his work with David Bowie, Hazel O’Connor, T-Rex, The Moody Blues and Morrissey. The stunning results of their unique collaboration are the two tracks ‘Burn Bright’ / ‘The Dancing Marquis’ that kick-off this CD.

•    Next to producer Tris Penna, Tony Visconti also lends a helping hand on string arrangements and mixing duties on two further tracks, ‘Tasmanian Tiger’, and ‘Death of a Dandy’, the latter inspired by the recent death of Soho’s tragic artist Sebastian Horsley and which also features special guest Danielz from T-Rex tribute ‘T.Rextasy’.

•    Carrying on in this collaborative vein, the CD also includes the talents of Martin McCarrick (Siouxsie And The Banshees, Therapy?) contributing  cello on the hearteningly buoyant ‘Burn Bright’ and strings on the title-track ‘The Dancing Marquis’, a song that Marc Almond wrote ‘with Henry Paget 5th Marquess of Anglesey in mind’.

•    Jarvis Cocker brings to the mix an infectious electro-pop number he wrote especially for Marc, ‘Worship Me Now’, where he also features as a special guest on backing vocals and on the production duties with Jason Buckle (All Seeing I). Two additional dance remixes of ‘Worship Me Now’ are also included exclusively on this release. ‘Love Is Not On Trial’ sees Marc Almond continuing his collaboration with Carl Barat (Libertines), his co-star in the 2012 opera ‘Poppea’ at Theatre du Chatelet in Paris.

•    Produced again by Tris Penna, the song was written especially for Marc by Carl, who also features on guitar and vocals.

•    Completing this release are two further all new tracks, So What’s Tonight? and Idiot Dancing.

This product is released June 16 2014 and will not be dispatched before this date.