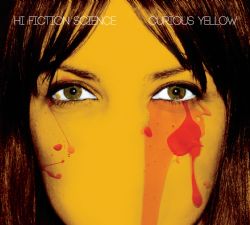 •    MIXED BY JIM BARR (PORTISHEAD / GET THE BLESSING)

Their early gigs saw Hi Fiction Science perform motorik, Kosmiche influenced instrumental workouts with a nod to Cluster, Neu! and Can. With the addition of singer Maria Charles – formerly of Bristol experimentalists Fuzz Against Junk – the band took a direction that filters Acid-Folk, Art Rock, Post-Punk and Electronica. Their self-titled debut album was released independently on their own imprint ‘Negative Drive Records and they released a 7″ single – a cover of the Third Ear Band’s ‘Fleance’ on the Fruits de Mer label, (which promptly sold out of its initial pressing after the band received BBC 6 Music airplay from Stuart Maconie on the Freakzone and by Tom Robinson.

The album was recorded in Bristol at State of Art Studio and mixed with Jim Barr (Get The Blessing / Portishead). “Curious Yellow” is one of the most sensory provoking and memorable albums to be released in 2014.