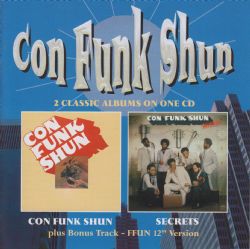 SKU: CDMRED555
Categories: 9.95, Cherry Red Records, Physical, Robinsongs, Sitewide Sale
Share:
Description
The Third and most anticipated Con Funk Shun release on Robinsongs sees
Two early Con Funk Shun albums from 1976 &1977 coupled together “Con Funk
Shun” (The Bands Mercury Records debut) and “Secrets”.
This is the first UK outing on CD for the self- titled album.
These Two albums include the singles ‘Sho’ Feels Good To Me’, The number
1 U.S. R&B chart single ‘Ffun’ and the bands theme song ‘Confunkshunize Ya’,
also included as a Bonus Track is the Rare 12” version of ‘Ffun’.
Both of these albums were awarded gold status in America.
Both albums were produced by Con Funk Shun and on “Secrets” they were
assisted by legendary Soul producer Skip Scarborough.
Package includes sleeve notes by Rico Washington with anecdotes from
Band member Felton C Pilate II.
Following on from the success of the previous Robinsongs Con Funk Shun
releases, don’t miss out, get your fill of Con Funk Shun Funk today.