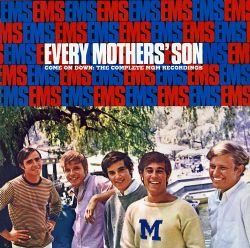 Come On Down, The complete MGM recordings
Every Mothers' Son

SKU: CRNOW36
Categories: 9.95, Now Sounds, Physical, Sitewide Sale
Share:
Description
BOTH OF THEIR CLASSIC LPs on 1CD!
FIRST TIME EVER COMPILED ON CD!
FROM THE ORIGINAL MASTER TAPES!
EVERY MOTHERS’ SON—best known for their Summer of Love Top 10 hit “Come On Down To My Boat Baby”—was born in Greenwich Village in the spring of 1966. Brothers Lary and Dennis Larden decided to fuse their folk background with rock elements, adding organist Bruce Milner, bassist Schuyler Larsen, and drummer Christopher Augustine to the mix to create a fantastic, Monkees/Turtles-esque pop outfit.
Included here are their two WES FARRELL-produced, 1967 LPs: Every Mothers’ Son and Every Mothers’ Son’s Back; the latter of which was even more creatively ambitious than their debut and has never before been issued on CD—until NOW! Also included is their only non-LP single, ‘No One Knows.’ From the original master tapes!