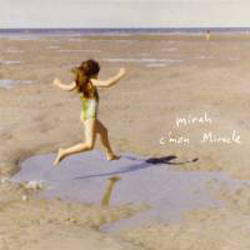 Mirah Yom Tov Zeitlyn (her first name pronounced as the former Italian currency) was born on the kitchen table at her parents then home on Westview Street in Philadelphia, Pennsylvania. The youngest of three, Mirah grew up mostly in Bala Cynwyd, a suburb of Philadelphia. In her waning teen years, she moved to Olympia, Washington to attend The Evergreen State College and continuing to reside there following graduation, she began making music by default, teaching herself to play guitar and composing ‘songs’ and releasing her first album Storageland on yoyo Recordings in 1997. Proudly joining the roster of other fine artists on the K record label in 1999, she began to experiment with recording, producing some material by herself and also working with her close friend and favourite person to record with ever, Phil Elvrum. Several fantastic albums, ‘You Think It’s Like This But Really It’s Like This’, ‘Advisory Committee’ & ‘Songs from the Black Mountain Music Project’ have since been released by Mirah on K. In March of 2004, her mostly covers collaboration with the Black Cat Orchestra from Seattle, entitled ‘to all we stretch the open arm’, was released on yoyo recordings (www.yoyoagogo.com).

Her latest album ‘C’mon Miracle’ is the first to see a full European release, courtesy of the Arrivederci label which previously brought us Seagull Screaming Kiss her Kiss Her from Japan and Hang On The Box from China.

This new batch of songs stands solid and unafraid; pianos and drums, truth and protest. Far from your average songstress, Mirah will enchant you with her genuinely intimate and carefully crafted songs. From meandering electronic journeys to fragile acoustic to majestically epic soundscapes to stomping pop textured with exotic layers of instrumentation, she glides seamlessly across a spectrum of styles. Taking centre stage are her vocals. At turns she whispers vulnerable and breathy then she unleashes her powerconfidently soaring through sound. Her songs possess an underlying intelligent lyrical wordplay. Songs of love and loss, small town imagery, rousing political commentary and clever tales laced with playfully provocative innuendo.

Notice: id was called incorrectly. Product properties should not be accessed directly. Backtrace: require('wp-blog-header.php'), require_once('wp-includes/template-loader.php'), include('/themes/xstore/woocommerce/single-product.php'), wc_get_template_part, load_template, require('/themes/xstore/woocommerce/content-single-product.php'), do_action('woocommerce_after_single_product_summary'), WP_Hook->do_action, WP_Hook->apply_filters, woocommerce_output_product_data_tabs, wc_get_template, include('/themes/xstore/woocommerce/single-product/tabs/tabs.php'), wpb_new_product_tab_content, WC_Abstract_Legacy_Product->__get, wc_doing_it_wrong Please see Debugging in WordPress for more information. (This message was added in version 3.0.) in /home/cherryredco/public_html/wp-includes/functions.php on line 4986
Nobody Has to Stay / Jerusalem / Light / Don't Die in Me / Look Up! / We're Both So Sorry / Dogs of B.A. / Struggle / You've Gone Away Enough / Promise to Me / Exactly Where We're From