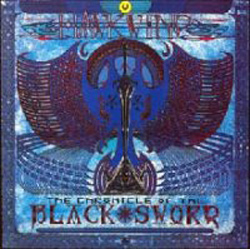 Chronicle Of The Black Sword
Hawkwind

SKU: ATOMCD1012
Categories: 9.95, Atomhenge, Esoteric Sale, Hawkwind Sale, Physical, Sitewide Sale
Share:
Description
Released 29/06/09. Atomhenge, the home of Hawkwinds catalogue from 1976 1997, continue their series of definitive reissued editions of these classic albums with the release of The Chronicle of the Black Sword .

The conceptual album (based on Michael Moorcock s Elric books) was recorded in 1985 and was arguably one of Hawkwind’s finest albums of later years. Critically acclaimed upon release, the album was followed by an extensive tour which would give rise to the Live Chronicles album. Deleted for many years, this reissue has been remastered from the original master tapes and includes the bonus tracks Arioch (from the rare 1985 CD edition of the album), along with all four tracks from the 1984 Earth Ritual EP