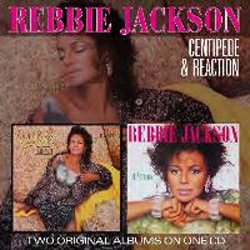 Rebbie Jackson is related to that famous Jackson family –She is the oldest being born on May 29, 1950 and has stayed in the shadows, almost unheralded and certainly never acclaimed in the manner of her brothers and sisters. These are hitherto comparatively undiscovered albums, with quality songs and distinctive vocal performances.

The ‘Centipede’ album reached 63 on the US charts and 13 on the r&b charts. This was very much a family affair with Rebbie’s husband co-writing the song ‘Come Alive Saturday Night’ with her brothers Randy and Tito. The latter also co-wrote ‘Hey Boy’, with his wife and the biggest song on the record was the title track, which was written, produced and arranged by Michael Jackson, who also did the backing vocals. Released as a single, it reached number 24 on the US charts. The next album, “Reaction” was produced by Tito Jackson, with David Townsend and David Conley and reached number 54 on the R&B Charts. There were two great duets ‘You Send The Rain Away’ saw Rebbie team up with Cheap Trick’s Robin Zander, and ‘Tonight I’m Yours’ had Isaac Hayes joining Rebbie.

Notice: id was called incorrectly. Product properties should not be accessed directly. Backtrace: require('wp-blog-header.php'), require_once('wp-includes/template-loader.php'), include('/themes/xstore/woocommerce/single-product.php'), wc_get_template_part, load_template, require('/themes/xstore/woocommerce/content-single-product.php'), do_action('woocommerce_after_single_product_summary'), WP_Hook->do_action, WP_Hook->apply_filters, woocommerce_output_product_data_tabs, wc_get_template, include('/themes/xstore/woocommerce/single-product/tabs/tabs.php'), wpb_new_product_tab_content, WC_Abstract_Legacy_Product->__get, wc_doing_it_wrong Please see Debugging in WordPress for more information. (This message was added in version 3.0.) in /home/cherryredco/public_html/wp-includes/functions.php on line 4986
Centipede / Centipede / Come Alive It's Saturday Night / Hey Boy / Open Up To My Love / Play Me (I'm A Jukebox) / I Feel For You/ A Fork In The Road/ Ready For Love / Reaction / Reaction / Ain't No Way To Love / Ticket To Love / You Don't Know What You're Missing / You Send The Rain Away / If You Don't Call (You Don't Care), / Always Wanting Something / Tonight I'm Yours / Lessons (In The Fine Art Of Love)