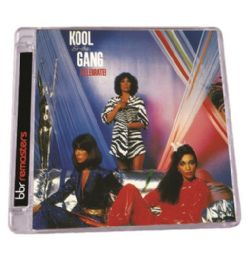 · KOOL & THE GANG need no
introduction. They were the top selling Soul group of the 70’s and 80’s having
sold over 70 million albums worldwide and have received countless awards.
Without them we would not have such great hits as ‘Summer Madness,’ ‘Get Down
On It,’ ‘Celebration’ and who could forget that slammin’ funk monster that
features so heavily in Quentin Tarantino’s cult flick – Pulp Fiction; ‘Jungle
Boogie.’”

· CELEBRATE!, released in 1980, once
again featured the production of legendary Grammy Award Winner, Eumir Deodato.
The album garnered huge success, reaching the top spot on the U.S. R&B
charts, and top ten positions in both the U.S. and U.K. pop charts, gaining
platinum certification in February 1981.

· The albums singles performed just as
impressively with CELEBRATION, arguably the group’s most successful song,
hitting the top spot on the US Billboard Pop and R&B charts and #7 in the
U.K. winning platinum status in the U.S. along the way. CELEBRATION also hit the top of the charts all around the
world and was later redubbed with Spanish vocals and released to the Latin
American market as CELEBREMOS, and featured as a B-side to TAKE IT TO THE TOP
which hit a top 20 spot in the U.K. The soulful lament JONES VS. JONES closed
out the single releases gaining a top 40 spot in the U.S. and a top 20 in the
U.K., making #17.

· Released in a deluxe Super Jewel
case, this BBR re-master is a must have for all Soul, Funk, R&B, Disco and
Pop fans out there!