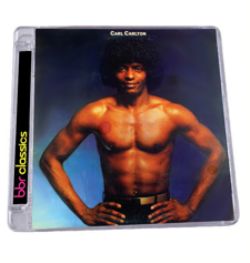 •    CARL CARLTON, born in 1952 and hailing from Detroit, Michigan, was an R&B, Funk and Soul singer/songwriter who is arguably best known for his crossover hits “Everlasting Love” from 1974 and the Leon Haywood penned “She’s A Bad Mama Jama (She’s Built, She’s Stacked)” from 1981 which features on this, his eponymously titled album release from the same year. Carlton’s career got started through the most coincidental of circumstances – while playing baseball with friends in a vacant lot a neighbour called down and yelled for the boys to “stop playing and turn that radio off,” the reply came back, “that ain’t no radio, that’s Carl.” Within a short space of time the astonished neighbour had helped Carlton secure a deal with Lando Records in the mid-sixties, recording under the name “Little” Carl Carlton, as his voice had similarities to Stevie Wonder.

•    After moving on to Back Beat Records and working with the likes of Gamble/Huff and Bunny Sigler, where he recorded several favourites on the Northern Soul scene, and which culminated in the #6 Pop hit “Everlasting Love,” Carlton put a period of inactivity behind him in the late 70’s when Leon Haywood helped him get a singles deal with 20th Century Fox Records in 1980 and took on the production duties.

•    The first single to be released from CARL CARLTON was Haywood’s “This Feeling’s Rated X-tra,” (R&B #57) a solid, low tempo, funky ode to doing the nasty, with a stunning combination of smooth strings and punching horn refrains and was backed with James Ingram’s “Fighting In The Name Of Love”. The success of the first single led to the release of “She’s A Bad Mama Jama (She’s Built, She’s Stacked)” (R&B #2/Pop #22/UK #34). This iconic track, which opens up with its unmistakeable and infectious rising bass line before giving way to the chorus and celebrating the physical virtues of the “She” in question, is now undeniably a classic R&B single. The crossover success of this single gave Carlton a greater audience for the forthcoming album and CARL CARLTON climbed to #34 on the Billboard Hot 200 giving the singer a career renaissance. “Sexy Lady and “I Think It’s Gonna Be Alright,” were also released as singles, the latter reaching #65 on the R&B chart.

•    BBR is proud to release CARL CARLTON, this fully remastered and re-packaged edition comes with extensive liner notes and bonus content and is a must for all R&B, Funk, Soul and Disco fans out there!