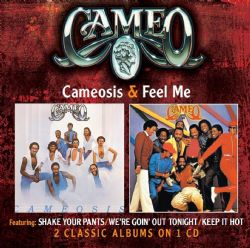 SKU: CDMRED652
Categories: 9.95, Cherry Red Records, Physical, Robinsongs, Sitewide Sale
Share:
Description
Robinsongs & Cherry Red are extremely pleased to announce the release of Cameo’s “Cameosis” & “Feel Me” albums as a two on one.
Both “Cameoisis” & “Feel Me” were originally released in 1980 “Cameosis” featured the Top 10 R&B single “Shake Your Pants” and the Top 15 R&B hit ‘We’re Goin’ Out Tonight’ this re issue also features as a bonus track the 7” version of ‘Shake Your Pants.’ The “Feel Me” album featured the Top 5 R&B hit ‘Keep It Hot’ and the single ‘Feel Me.’
Both of these albums were certified Gold in America
“Cameosis” even reached #25 in the Billboard Top 200 pop albums chart, their highest chart position since the Band’s launch in 1977. And the beginning of a chart run that would see Cameo become one of the greatest Funk/Pop bands of the 80’s.
Cameo’s style was very much in the Funk mould, and the Group were as highly regarded as Parliament, Funkadelic, Bar-Kays, Ohio Players,  Earth, Wind & Fire, Slave, The Isley Brothers, & Rick James etc.
This re issue features sleeve notes from Charles Waring with special thanks to Cameo’s Tomi Jenkins for his recollections of these wonderful albums. Charles is a Contributor to MOJO and Record Collector and co-founder of www.soulandjazzandfunk.com
N.B: This title is released March 9 and will not be dispatched before his date.
Track Listing:
CAMEOSIS
1. CAMEOSIS
2. SHAKE YOUR PANTS
3. PLEASE YOU
4. WE’RE GOIN’ OUT TONIGHT
5. I CARE FOR YOU
6. ON THE ONE
7. WHY HAVE I LOST YOU
BONUS TRACK
8. SHAKE YOUR PANTS – 7” VERSION.
FEEL ME
9. THROW IT DOWN
10. YOUR LOVE TAKES ME OUT
11. KEEP IT HOT
12. FEEL ME
13. IS THIS THE WAY
14. ROLLER SKATES
15. BETTER DAYS
Additional information
Tracklist
Track listing as above.
Reviews (0)