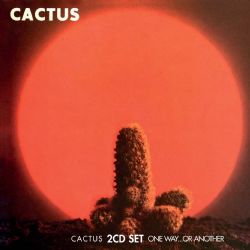 Cactus / One Way… Or Another 2CD
Cactus

SKU: HNECD019D
Categories: 10.95, HNE Recordings, HNE Sale, Physical, Sitewide Sale
Share:
Description
Formed in 1969 by former members of Vanilla
Fudge – Tim Bogert on bass and Carmine Appice on drums – Cactus released their
self-titled debut on the Atco label in 1970. Although originally slated to
feature Rod Stewart and Jeff Beck, the line-up would be cemented by Jim McCarty
(from Mitch Ryder’s Detroit Wheels and The Buddy Miles Express) on guitar and
Rusty Day (from Ted Nugent’s original band, The Amboy Dukes) on vocals and
harmonica; the line-up that would record the band’s first three LPs.
Among the originals on the first disc of this
2 CD set, are covers of Mose Allison’s blues standard ‘Parchman Farm’ (also
covered by proto-metal band Blue Cheer), plus Willie Dixon’s ‘You Can’t Judge a
Book by the Cover’.
Releasing their second LP in 1971 (disc 2 of
this set), “One Way…Or Another” was recorded at Jimi Hendrix’s Electric Lady
Studios in New York, and also includes two classic covers in Little Richard’s
‘Long Tall Sally’ and Chuck Willis’ ‘Feel So Bad’.
With remastered audio, and four bonus tracks,
this set features liner notes from Classic Rock’s Malcolm Dome based on recent
interviews with founder member Carmine Appice. Cactus are currently touring
with a line-up of Jim McCarty, Carmine Appice, Jimmy Kunes, Pete Bremy and
Randy Pratt.