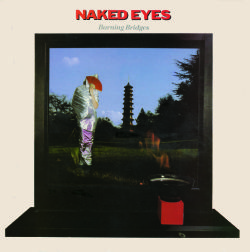 SKU: CRPOP111
Categories: 9.95, Cherry Pop, Cherry Pop Sale, Physical, Sitewide Sale
Share:
Description
A long overdue reissue of synth-pop pioneers Naked Eyes’ 1983
debut album “Burning Bridges” plus bonus tracks.
“Burning
Bridges” featured singles that charted both sides of the Atlantic. Their cover
of the Bacharach & David’s classic ‘Always Something There To Remind Me’
peaked at #8 and its follow up ‘Promises Promises’ reached 11 – both in the
U.S. Hot 100 chart.
This special
edition contains 12 tracks from the original album plus six essential bonus
tracks.
The bonus
material features two 12″ versions of ‘Promises Promises’ including
Jellybean’s extended version featuring his
– then unknown – girlfriend Madonna on backing vocals. Tony Mansfield’s
American Remix of ‘Always Something There To Remind Me’, the US 7″ remix
of ‘Promises Promises’ and two b/sides ‘Pit Stop’ and ‘Sweet Poison’.
The sleeve
notes have been written by Michael Silvester who talked at length with Pete
Byrne about the naked Eyes story. The CD booklet features many of the original sleeves and a full UK discography.Press: “…their debut is an overlooked gem very much of its time…” – Classic Pop Magazine, Issue 2, December 2012
Additional information
Tracklist