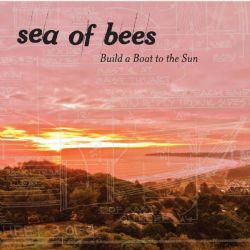 Build A Boat To The Sun
Sea of Bees

“Keep going, don’t stop, and be yourself. Never settle for less. I have finished the record I have been meaning to make. Things are changing for the good and I am happy.” Jules, April 2015

· Sea of Bees is the musical project of Julie Ann Bee, or Jules as everyone calls her. She sings, writes the songs, and plays lots of musical instruments. She is the kind of singer-songwriter you come across only a few times in a lifetime – special, unusual, leaping out at you like an alien, her character fully-formed, her uniqueness intact.
· Following the acclaim of debut album, Songs For The Ravens and follow-up Orangefarben, Jules is leaving the darkness for brighter horizons, gathering the good things up, leaving the bad behind and moving forward. The music has moved forward sonically too, with a full band sound after Jules bought a drum set and spent as much time playing it as she played guitar, much to her neighbour’s dismay.
· Working with long-time producer John Baccigaluppi she again visits a variety of styles across the album – folk, Americana, pop and rock. The album was mixed by Jesse Lauter (The Low Anthem).
Sea Of Bees support Sarah Cracknell on a 5 date UK tour in mid- June and will be headlining her own gigs in July.
16 June – Brighton Komedia
17 June – London Bush Hall
19 June – Glasgow Oran Mor
20 June – Manchester Deaf Institute
21 June – Leeds City Varieties
PREVIOUSLY:
“a sound that, when combined with candidness of her lyrics… proved devastating” The Times
“a female Sparklehorse. Her music is rooted very much in folk and rock but wildly experimental; some crazy, beautiful, wonderful sounds” Robin Hilton, NPR radio
“I’m not entirely sure why I love this album so much… That which I cannot put my finger on, is the mysterious, wonderful, and addictive qualities of this album as a whole” Jason Lytle, Grandaddy
“if she doesn’t become the sensation she deserves to be it’ll be a crime” The Independent
1. TEST YOURSELF
2. KARMA KARD
3. OLD BRIDGE
4. EASE
5. DON’T FOLLOW ME
6. LITTLE SEA
7. DAN
8. MOLINE
9. DAD
10. MONK