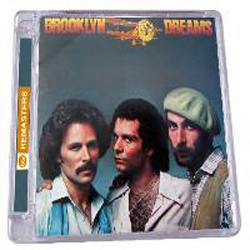 The BROOKLYN DREAMS
classic 1977 debut album finally makes it to CD for the first time anywhere in
the world! The album is highly regarded amongst disco fans.

The album was a huge
cult disco hit on its original release on Casablanca Records.
Singles included the
Disco anthem MUSIC, HARMONY & RHYTHM as
well as the Pop hit SAD EYES.
OLD FASHIONED GIRL
features a guest appearance from the Queen of Disco DONNA SUMMER at the height
of her reign.
This remastered edition
features extensive liner notes and three bonus remixes.
This long
sought-after CD re-master is a must for all Soul and Disco fans