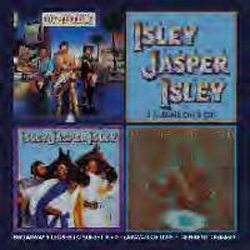 Released on 15/03/10. 3 Original Albums On 2 CD’s Broadway’s Closer To Sunset Boulevard Isley/Jasper/Isley sdebut release boasted the Top 14 R&B smash Look The Other Way, as well as favourites Serve You Right and the samba tinged I Can’t Get Over Losin You . Keyboardist Chris Jasper’s fluid dexterity is displayed on the pulsating Sex Drive and light pop sensibilities on the shimmering Love’s Gonna Last Forever .

Caravan Of Love : The album’s title track topped the R&B charts and was an international smash that would also later be covered by The Housemartins.

Different Drummer : The third and final album from the second generation of Isleys was released in 1987 and as the previous albums, all songs were written, arrange, produced and performed by Ernie Isley, Chris Jasper and Marvin Isley. Three original albums on double CD

Caravan Of Love
Dancin' Around The World / Insatiable Woman / I Can Hardly Wait / Liberation / Caravan Of Love / If You Believe In Love / High Heel Syndrome Disc Two : Different Drummer : Different Drummer / 8th Wonder Of The World / Blue Rose / Do It Right / Givin' You Back The Love / A Once In A Lifetime Lady / For The Sake Of Love / Brother To Brother / I Wanna Be Yours