We use cookies to ensure that we give you the best experience on our website. Click OK to accept and continue shopping, or find out more in our cookie policy...OKRead More
Return to previous page
Sale 67% 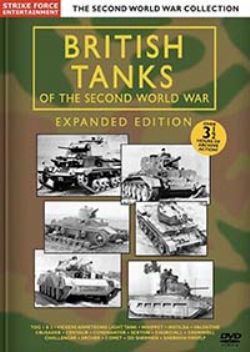 SKU: SNA6745
Categories: SFE, SFE Christmas Sale
Share:
Description
British Tanks Of The Second World War – Expanded Edition teams the definitive archive film led documentary on the history and development of Second World War British Tanks with five official British military training films from the Imperial War Museum Film Archive detailing tank design, recognition and fighting tactics.
In comparison to the German’s formidable Panzer Force at the outset of WW2, British tanks were throwbacks to the crude designs of the Great War. From the Tog 1 at the outset of war to the Comet at the end of hostilities, there was a never ending cycle of improvements in firepower, manoeuvrability and crew protection that turned around the initial inferiority of British tanks into a fearsome strike force that outfought the Panzer divisions and paved the way for Victory!
Tanks that smashed through defences and enemy lines, destroyed gun positions and isolated and paralysed the enemy. As the land war progressed relentlessly across Northern Europe, British Tanks met the challenge of heavier German Tanks by successfully mating the 17 Pdr Gun to the Sherman Tank to create the tank destroying Firefly. British Tanks Of The Second World War is the fascinating story of the design innovations and adaptations including tanks that could ‘swim’ and lay bridges.
ADDITIONAL FILMS :
“Beach Obstacles” (1943) – A fascinating silent film illustrating the many tank adaptations created to overcome beach defences including walls, wire-filled gullies, concrete ‘egg’ obstacles, steel tubes. Includes images of Churchill tanks with ‘carpet’ laying equipment enabling troops to cross areas of densely packed barbed wire and customised Convenanter and Matilda tanks with a variety of explosive charges.
“Tank Battle” (1941) shows how an armoured formation goes into battle.
“Ten Tips for Tackling Tanks” (1941) advises on the methods that can be deployed to attack, disable and disarm tanks.
“Spot That Tank” (1942) is a Army Fighting Vehicles official recognition film.
“Tank Patrol” (1942)  is a dramatised documentary overview of a routine patrol.
“Birth of a Tank” (1942) details the intricate manufacture and roll-out of a brand new Valentine tank.
N.B: This title is released 28th August 2015 and will not be dispatched before this date.
Additional information
Tracklist