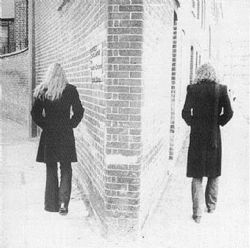 •    NEWLY REMASTERED OFFICIAL RELEASE OF THIS CLASSIC ALBUM FROM 1972

Esoteric Recordings are pleased to announce the release of an official re-mastered edition of “BORED CIVILIANS”, the only album by the duo of KEITH CROSS & PETER ROSS. Keith Cross had earned plaudits as a young guitar virtuoso with the power trio T2 (who recorded an album for Decca Records in 1970).

By 1972 his music had developed still further when he teamed up with PETER ROSS to record this marvellous album for Decca Records with guest musicians such as Nick Lowe, Jimmy Hastings and B.J. Cole.

Highly sought after by collectors of the “progressive” era, “Bored Civilians” has been newly re-mastered from the original Decca master tapes and includes two rare B-sides as bonus tracks. This Esoteric Recordings reissue restores the original album artwork and includes a new essay.