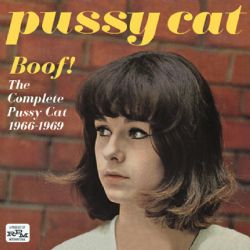 •    Pussy Cat was the most tough sounding of France’s ‘60s yé-yé girls. She looked to Britain for her inspirations, not home-grown, upbeat Gallic pop. She covered Small Faces, The Moody Blues, The Hollies and The Zombies. Her original songs – she was a rarity and wrote her own – were energised, hard edged, melodic and stomping. She put a French twist on the mod era.

•    Boof! is the first-ever Pussy Cat – born Évelyne Courtois – collection to be issued outside France. Her complete ‘60s recordings, including two tracks unheard at the time, are collected.

•    As a special bonus, her debut release, a 1965 EP with the band Les Petites Souris is also collected. They were France’s first all-girl band. At age 17, she was their guitarist and wrote their songs. She was a pioneer.

•    Pussy Cat took her name from the Tom Jones song ‘What’s New Pussycat’. She toured France with him.

•    With extensive liner notes and illustrations, this package is the ultimate tribute to France’s one-woman musical dynamo of the 1960s.

•    RPM International is the authoritative home of the greatest music from France’s past.