We use cookies to ensure that we give you the best experience on our website. Click OK to accept and continue shopping, or find out more in our cookie policy...OKRead More
Return to previous page
View cart “Magnificent: 62 Classics From The Cramps’ Insane CollectionVarious Artists” has been added to your cart. 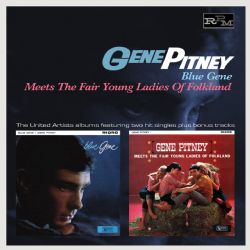 SKU: RETRO926
Categories: 10.95, Physical, RPM, RPM Sale, Sitewide Sale
Share:
Description
Comprises
two original albums, including Pitney’s first UK Top 5 hit ‘Twenty-Four Hours
From Tulsa’ and its follow-up, the Jagger/Richards-penned ‘That Girl Belongs To
Yesterday’.
Booklet
features the original Musicor album sleeves and updated liner notes by Pitney
authority Roger Dopson.
Superior
sound quality throughout.
GENE PITNEY was
one of the most prolific and successful international artists of the 1960s,
releasing some twenty-five albums (plus a further dozen or so “Greatest Hits”
sets) and around thirty-five singles.
In the 1990s,
Sequel Records paired up Gene’s original LPs as 2-on-1s, plus bonus tracks and
all mastered from first-generation tapes.
Pitney himself was delighted with the results. Sadly Gene died in 2006
whilst touring the UK, by which time these 2-on-1s had long been deleted. However, thanks to RPM, these well-regarded
compilations are once again available.
Released in
November 1963, Blue Gene was Gene’s fourth US album and the first to be
released in the UK where it reached No.7 in April 1964. The plug track ‘Tulsa’
was complemented by covers of popular standards (‘I’ll Be Seeing You’, ‘Answer
Me, My Love’) and new material (‘Yesterday’s
Hero’, ‘I Can’t Run Away’). The
UK edition differed by one track; ‘Take
It Like A Man’ was the closer in place of ‘House Without Windows’.
Following hard
on its heels that December came Meets The Fair Young Ladies Of Folkland, a
“concept” album which marked a departure from the usual hit-driven
formula. In an attempt to woo the teen
market, the album was hastily repackaged as Dedicated
To My Teen Queens and remains one of Gene’s rarest albums. Gene’s second UK Top 10 single, ‘That Girl Belongs To Yesterday’, is
included here by way of a bonus.