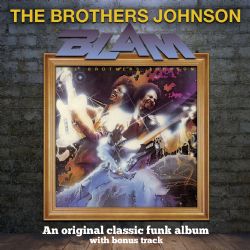 As the Brothers Johnson, L.A. natives George (guitar) and Louis (bass) were among the most renowned funk’n’soul teams of the mid-‘70s and early ‘80s, thanks to a series of best-selling albums and U.S. hit singles (such as ‘I’ll Be Good To You,’ ‘Strawberry Letter 23’ and ‘Stomp!’, cut for A&M Records between 1976-1984.

Initially working with the legendary Quincy Jones, the talented brothers had been part of Billy Preston’s band before Jones spotted them during a rehearsal they were doing with Stevie Wonder.

After two platinum albums, George and Louis began working on their third A&M set, BLAM!! in 1978 and with the hits, ‘Ride-O-Rocket’ (penned by the famed team of Nick Ashford & Valerie Simpson) and ‘Ain’t We Funkin’ Now’ – also both U.K. Top 50 charted singles – the album became the duo’s third platinum and highest-charting LP.

Tracks such as the instrumentals ‘Mista Cool’ (which was Quincy Jones’ nickname for George Johnson) and ‘Streetwave’ became favourites among UK club goers and rare groove fans and BLAM!! – which has been out of print on CD for several years – is making a welcome return with this SoulMusic Records’ reissue, part of the label’s classic funk series.

Notes by renowned writer Lewis Dene include quotes from an extensive 2012 interviews with George Johnson for this reissue.