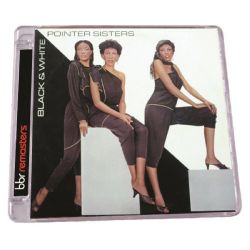 SKU: CDBBRX0150
Categories: 10.95, Big Break Records, Physical, Sitewide Sale
Share:
Description
· The Pointer Sisters and Richard
Perry switched gears in 1980 with the release of Special Things (CDBBR0022) and its massive hit single ‘He’s So Shy’
which landed in both the pop and R&B top ten. Buoyed by this success Perry
was once again prepared to take the Sisters back into gold territory, and gave
them the biggest selling single and album of their career so far with two Gold
Certifications.
· BLACK & WHITE was titled so to
reflect the broad musical influences heard in the music of The Pointer Sisters.
The album immediately spun off the biggest ever American Pop hit of The Pointer
Sisters’ career. ‘Slow Hand’ reached #2 on the Hot 100 and stayed there for three
weeks, prevented from reaching the top spot by Diana Ross and Lionel Richie’s
mega selling ‘Endless Love.’ As well as returning the group to the R&B top
ten in the U.S., it did the same in Canada, many European countries, and at
long last, the U.K. The Country-Soul ballad remains an adult contemporary
staple on radio stations all over the world to this day.
· ‘Should I Do It’ was issued as the
second single in many European countries where it became so successful that it
was belatedly issued as a U.S. single, returning them to the
pop top 20. Elsewhere on BLACK & WHITE industry heavyweights such as David
Foster, Russ Ballard and Patrick Henderson lent their song-writing skills,
making the album a Pop/Soul classic from start to finish. As well as being a
gold selling album in the U.S. Black And White succeeded all over the world and
became the group’s first U.K. hit album reaching #21 for a three month stint in
the autumn of 1981.
· BBR is very proud to release this
expanded remaster of BLACK & WHITE which now features three bonus tracks – including
a track that was removed from the LP just before its release – as well as brand
new interviews with Anita Pointer, Ruth Pointer, Richard Perry and David Foster
amongst others. BLACK AND WHITE is essential listening for all Eighties Soul
and Pop fans out there.
Available 30/09/2013
Additional information
Tracklist
Reviews (0)