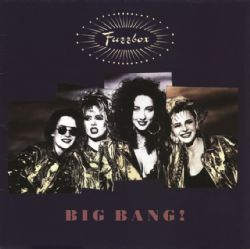 SKU: CDBRED558
Categories: 10.95, Cherry Red Christmas Sale, Cherry Red Records, Physical, Sitewide Sale
Share:
Description
The four Queens of the Galaxy ride again! Three
years, four galaxies and a zillion zany adventures after the release of their
debut of their debut album ‘Bostin’ Steve Austin’ the mighty We’ve Got A
Fuzzbox And We’re Gonna Use it!! returned to Earth from their extended hiatus
on the planet Lovely, with this their second coming – ‘Big Bang!’
The first single launched from the album,
International Rescue [UK #11] rocketed its way into the the UK single charts
and a new age of Fuzzbox begun. Gone were the mohair jumpers, day-glo hair and
so-called “musical ineptitude” that had first enamoured them to the
world, replaced instead with co-ordinating military style uniforms, a refined
glamour and a slick Fairlight production style, whilst still retaining their
unique charm and wit. The accompanying promo video for International Rescue,
directed by comedy genius Adrian Edmondson (The Young Ones & Bottom) became
an intergalactic hit upon its release, fueled by its Thunderbirds meets
Barbarella sci-fi action theme, and Fuzzbox we’re beamed into the homes of
millions of TV viewers across the land, becoming instant media darlings in the
process. Fuzzbox were go!
Whilst the albums second single; Pink Sunshine
[UK #14] stalled at the upper-end of the
UK Top #20, despite being the bands biggest selling single to date, Fuzzbox’s
star could not have shone brighter. Six Top of The Pop’s performances, Capital
Radio promotional shows and endless magazine covers including the NME, Smash
Hits and Record Mirror followed. The third single from Big Bang!, the rockier,
Self! [UK #24], earned the band their third consecutive chart entry single and
even featured a guest guitar performance from the legendary Brian May (Queen),
it seemed everybody wanted in on the fuzz.
Released in August, 1989, Big Bang! [UK #5] was
certified Gold upon its release for initial sales in excess of 250,000 in the
UK alone and received critical acclaim from champions old and new, including a
4/5 review from Q Magazine, who praised the band for their musical evolution
and song-writing prowess.
Despite the bands desire to take Big Bang! out on
tour their promotional commitments made this impossible, much to their chagrin.
As tensions grew between the band members, so did those with their record
company, this was brought to a head when Fuzzbox’s plan to release the fan
favourite Fast Forward Futurama as the fourth cut from the album was overruled
in favor of the Yoko Ono cover Walking on Thin Ice [UK #76] by label bigwigs,
resulting in a minor hit. A promotional tour of the Far East followed and
brought 1989 to a climactic end.
The band returned to the studio in 1990 to begin
work on their ill-fated third album, tentatively titled Out of this World; with
producer Leigh Roy Gorman (Bow Wow Wow). However, after the limited release of
the single Your Loss My Gain [UK #100], Jo, Maggie, Tina and ViX halted
production on the album and opted to disband; citing “musical
differences”, thus bringing about the end of an incredible five year
journey and leaving behind a musical legacy that is still unsurpassed, as the
UK’s most successful all-female band.
This special 2CD Orgasmatron Edition of the album
finally finds its way back to Earth on Cherry Red Records, 14 years after it’s
debut release on WEA Records. CD1 offers the original 10 track album digitally
remastered in all its gloriousness, whilst CD2 offers up a 15 track bonus
journey into the furthest reaches of space, time and the latter day Fuzzbox
archives, featuring: 12-inch mixes, B-sides, rarities, CD exclusives,
recordings from the Out of This World sessions and the 2004 Syndrum Mix of Fast
Forward Futurama featuring Manda Rin (Bis). The expanded CD booklet features
sleeve notes, complete with original and expanded artwork.