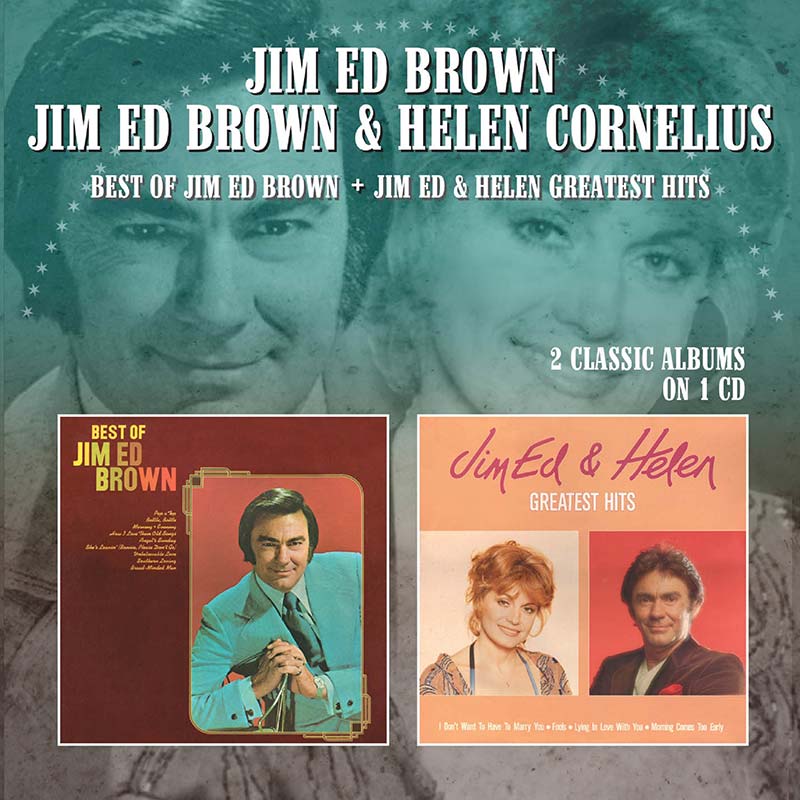 Jim Ed Brown was part of the brother-and-sister trio The Browns who clocked up twenty country hits between 1955 and 1967.

Jim Ed Brown was part of the brother-and-sister trio The Browns who clocked up twenty country hits between 1955 and 1967.

The first ten tracks on this collection feature some of Jim Ed’s solo hit records from 1967 to 1973 which include three Top 10 hits ‘Pop A Top’, ‘Morning’ and ‘Southern Loving’.

A further development in Jim Ed Brown’s career came in 1976 when he teamed with Helen Cornelius. The result was a No. 1 with ‘I Don’t Want To Have To Marry You’ launching country music’s teaming of talents and recognition coming their way with the CMA’s Vocal Duo of the Year accolade.

The duo’s Greatest Hits album, released in 1981, well lives up to its title and, besides kicking off with their award-winning debut single also includes six other Top 10 successes: ‘If The World Ran Out Of Love Tonight’, ‘Morning Comes Too Early’, ‘Lying In Love With You’, ‘You Don’t Bring Me Flowers’, ‘Saying Hello, Saying I Love You, Saying Goodbye’ and ‘Fools’ – several bringing a new level of adult sensitivity to country lyrics.

In March 2014 it was announced that The Browns would be inducted into The Country Music Hall of Fame and, prior to the induction ceremony, Jim Ed was presented with his Hall of Fame medallion by fellow Opry member Bill Anderson as he lay in a hospital bed stricken with cancer. He died 7 days later on 11th June 2015 – he was 81 years old.

7. HOW I LOVE THEM OLD SONGS

12. IF THE WORLD RAN OUT OF LOVE TONIGHT

17. YOU DON’T BRING ME FLOWERS