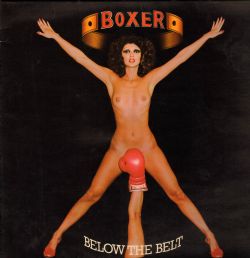 Below The Belt
Boxer

Esoteric Recordings are pleased to announce a newly
re-mastered edition of the classic 1975 debut album by the legendary BOXER.

Formed by vocalist MIKE PATTO and guitarist OLLIE
HALSALL two years after the demise of cult heroes PATTO, the line-up of the
band was completed by bassist KEITH ELLIS (formerly with Van Der Graaf
Generator, Juicy Lucy and Spooky Tooth) and drummer TONY NEWMAN (formerly with
the JEFF BECK GROUP and KEVIN AYERS’ band). Signing to Virgin Records in 1975,
BOXER recorded their debut album, “Below the Belt” at The Manor Studio in
Oxfordshire. Appearing briefly on CD in the 1990s, the album has been
unavailable for fifteen years.
This Esoteric Recordings reissue has been newly
re-mastered from the original master tapes and includes the bonus track ‘Don’t
Wait’, B-side of the band’s first single. The reissue features a booklet that
fully restores all original album artwork with a new essay.