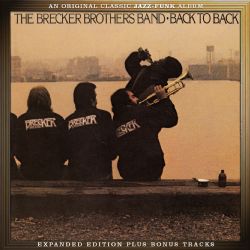 Back To Back
Brecker Brothers Band (The)

Released in 1976 as the follow up to the self-titled Arista debut album by super musicians (trumpeter) Randy and (saxophonist) Michael Brecker, BACK TO BACK was issued under the moniker ‘The Brecker Brothers Band’ as a result of the inclusion of other key players – Will Lee (bass, lead vocals); Chris Parker (drums); Don Grolnick (keyboards); David Sanborn (alto sax); and Steve Khan (guitars).

By the early ‘70s, brothers Randy and Michael found themselves in demand both on record and on tour after leaving the progressive jazz-rock-R&B horn band Dreams. Signed to Arista Records by respected industry executive Steve Backer, The Brecker Brothers’ first album gained traction through the R&B chart success of the single ‘Sneakin’ Up Behind You,’ which featured the musicians who would then tour as ‘The Brecker Brothers Band.’

BACK TO BACK not only featured the super talents of the Breckers and the extended band but an all-star cast that included drummer Steve Gadd, percussionists Ralph MacDonald and Sammy Figueroa, vocalist Patti Austin and at the time, session and jingle singer Luther Vandross (who co-wrote two songs on the album).

Key cuts on this expanded edition of the LP (out of print on CD for many years) include the single, ‘If You Wanna Boogie…Forget It,’ ‘What Can A Miracle Do’ and ‘Keep It Steady.’ Extensive liner notes by renowned US writer A. Scott Galloway include 2012 quotes from Randy Brecker, David Sanborn, Patti Austin, Will Lee, Steve Parker and Steve Khan among others.