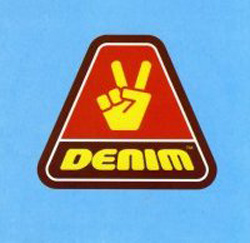 Denim was the brainchild of Lawrence who had spent the previous decade as the singer, songwriter and mastermind behind that ultimate independent rock band, Felt. Having achieved his goal of releasing 10 albums and 10 singles in 10 years during the course of the 80s, Lawrence disbanded Felt and relocated to New York. It was there that Lawrence translated his homesick thoughts from abroad into the series of songs that made up ‘Back In Denim’. Over in New York he wrote as he reminisced about his West Midlands childhood, flares, chopper bikes, tower blocks, stringy beards, hippies, skinheads and the IRA’s pub bombings in Birmingham. He set this to a musical backdrop of Mickey Most and Mike Leander productions, Lee Perry and the Glitter Band. Back In Denim was recorded and mixed across a two year period on Lawrence’s return to London.

It was finally completed in July 1992 and, for the first time in his career, Lawrence found himself signed to a major label via Boys Own, a dance label operating through London Records. The album was produced by John Leckie although completed by Lawrence with Brian O’Shaughnessy Leckie having allegedly been driven to complete distraction by Lawrence who he described as madder and more impossible than anyone he’d worked with including Spector, Lennon and Syd Barrett! Back In Denim kick starts with the pounding Glitter beat of ‘Back In Denim’. The Glitter Band’s drummer Pete Phipps is featured on the record. The album maintains a powerful mix of Glam and pop hooks and references throughout with one foot in the 70s past and the other very firmly in the technology of the 90s. As such,

‘Back In Denim’ was an undoubted pre-cursor to Britpop, Blur and Pulp, in particular. As ever, throughout his career Lawrence was ahead but out of step with popular taste. ‘Back In Denim’ was no mere exercise in nostalgia or Glam ‘n’ Glitter revival and, as Lawrence firmly attests today, it is a protest album though not without a real sense of biting humour coming through tracks such as ‘The Osmonds’ and ‘I’m Against the eighties’.

Notice: id was called incorrectly. Product properties should not be accessed directly. Backtrace: require('wp-blog-header.php'), require_once('wp-includes/template-loader.php'), include('/themes/xstore/woocommerce/single-product.php'), wc_get_template_part, load_template, require('/themes/xstore/woocommerce/content-single-product.php'), do_action('woocommerce_after_single_product_summary'), WP_Hook->do_action, WP_Hook->apply_filters, woocommerce_output_product_data_tabs, wc_get_template, include('/themes/xstore/woocommerce/single-product/tabs/tabs.php'), wpb_new_product_tab_content, WC_Abstract_Legacy_Product->__get, wc_doing_it_wrong Please see Debugging in WordPress for more information. (This message was added in version 3.0.) in /home/cherryredco/public_html/wp-includes/functions.php on line 4986
Back In Denim / Fish And Chips / Bubblehead / Middle Of The Road / The Osmonds / I Saw The Glitter On Your Face / America Rock / Livin' On The Streets / Here Is My Song For Europe / I'm Against The Eighties
Reviews (0)