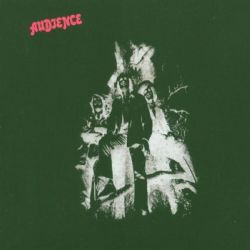 · REMASTERED FROM THE ORIGINAL MASTER TAPES
· WITH THREE BONUS TRACKS
· BOOKLET WITH NEW ESSAY & INTERVIEW WITH HOWARD WERTH
· REVIEWS IN “CLASSIC ROCK”, “PROG”, UNCUT”, “MOJO”,”RECORD COLLECTOR”
· COVERAGE ON RELEVANT WEBSITES & FANZINES
ESOTERIC RECORDINGS are pleased to announce the release of a newly remastered and expanded edition of the classic 1969 self-titled debut album by the legendary Progressive Rock group AUDIENCE. Along with GENESIS and VAN DER GRAAF GENERATOR, Audience were one of the key bands on the roster of the Famous Charisma Label in the early 1970s.
Prior to signing to Charisma, the band recorded their self-titled debut album on a production deal which appeared on the Polydor label in the late Spring of 1969 for a matter of months before being withdrawn.
Comprising HOWARD WERTH (Vocals, Electric Nylon String Guitar), KEITH GEMMELL (Saxophone, Clarinet, Recorder, Flute), TREVOR WILLIAMS (Bass, Vocals) and TONY CONNOR (drums, percussion, vibes), Audience had a fanatical following, particularly on the continent, where their jazz-influenced brand of Progressive Rock proved popular (earning the band Top Ten status in Italy).
This Esoteric Recordings reissue includes 3 bonus tracks and has been remastered from the original master tapes. It features a booklet with restored artwork and an essay by Sid Smith with an exclusive interview with Howard Werth.
1. BANQUET
2. POET
3. WAVERLEY STAGE COACH
4. RIVER BOAT QUEEN
5. HARLEQUIN
6. HEAVEN WAS AN ISLAND
7. TOO LATE I’M GONE
8. MAIDEN’S CRY
9. PLEASANT CONVALESCENCE
10. LEAVE IT UNSAID
11. MAN ON BOX
12. HOUSE ON THE HILL
BONUS TRACKS
13. PAPER ROUND
14. THE GOING SONG
15. TROUBLES
PLEASE NOTE THIS ALBUM IS RELEASED ON 29TH JUNE 2015 AND WILL NOT BE DESPATCHED BEFORE THAT DATE
Additional information
Tracklist
TRACK LIST AS ABOVE
Reviews (0)