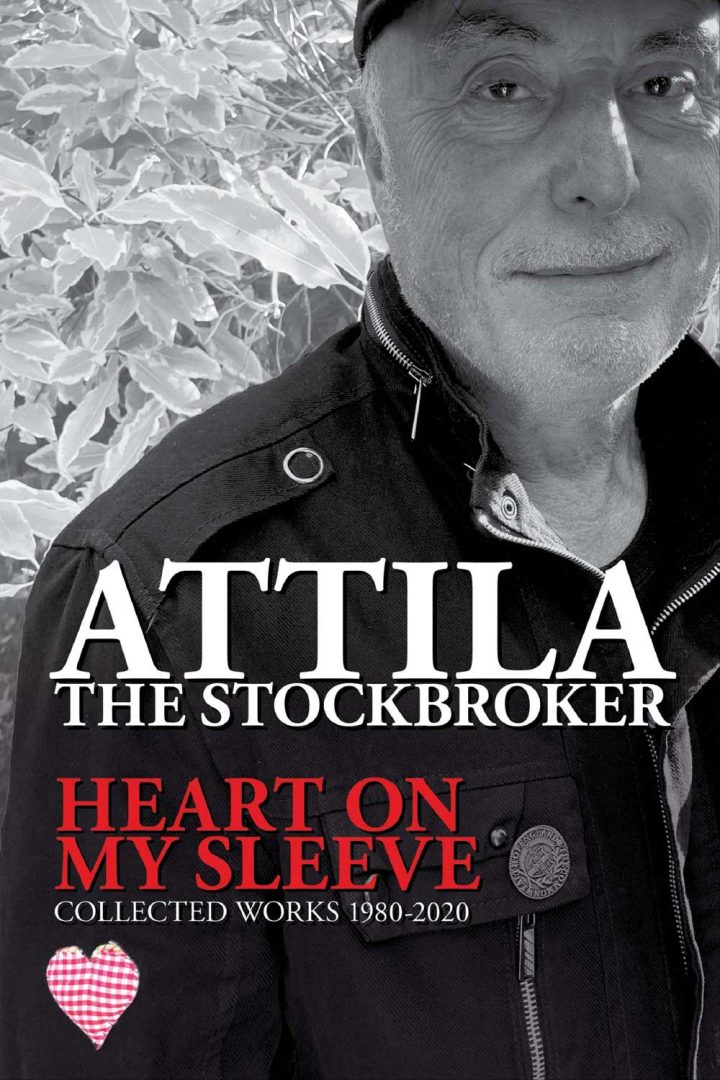 Featuring over a hundred and eighty works hand-picked by Attila himself, ‘Heart On My Sleeve’ is a must-read compendium of social commentary, human observation and humour, all of it written with a passion and enthusiasm which only seems to grow as Attila passes through the years.

• Launched into public consciousness by two John Peel sessions and a Melody Maker front cover in the early 1980s, poet, musician, journalist and political activist Attila The Stockbroker has spent forty years touring the world performing his unique brand of spoken word, poetry and music. Having played almost four thousand gigs in twenty four countries, releasing countless books and records along the way, Attila is now viewed as the godfather of the British spoken word scene.

• ‘Heart On My Sleeve’ brings together Attila’s collected poems and lyrics, celebrating the fortieth anniversary of his first appearance and a lifetime doing what he loves. All his early political punk poetry classics are here, the likes of ‘A Bang And A Wimpy’, ‘Russians In The DHSS’ and ‘Contributory Negligence’, alongside more recent favourites such as ‘Asylum-Seeking Daleks’, ‘Poison Pensioner’ and ‘The Bible According to Rupert Murdoch’. As such, this collection is testimony to Attila’s broadening work over the years, packed full of intensely personal pieces alongside political satire and humour. ‘Never Too Late’, explores his reconciliation with his stepfather after thirty-seven years (as featured on Radio 3’s ‘The Verb’ and Steve Lamacq’s 6Music show), whilst listeners to Radio 4’s ‘Poetry Please’ may recall ‘The Long Goodbye’, the epic, fourteen minute poem to Attila’s mother as she battled Alzheimer’s Disease, which was twice broadcast on the show.

• Featuring over a hundred and eighty works hand-picked by Attila himself, ‘Heart On My Sleeve’ is a must-read compendium of social commentary, human observation and humour, all of it written with a passion and enthusiasm which only seems to grow as Attila passes through the years.

• A legend of the international spoken word circuit, a long established Glastonbury regular, much loved at his cherished Brighton And Hove Albion Football Club, and the organiser of his own popular beer and music festival, Attila The Stockbroker remains as focussed and active as ever, and continues to perform to audiences across the English speaking world, including a run of successful recent online lockdown shows. His message remains a simple one: you don’t need to be ‘a celebrity’ to lead a life earning your living doing what you love to do. You just need a way with words, the self-confidence and organisational ability of Napoleon and skin thicker than the armour of a Chieftain tank.