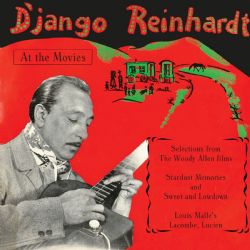 At The Movies
Django Reinhardt

SKU: ACMEM288CD
Categories: 9.95, El, El Records Sale, El! Christmas Sale, Physical, Sitewide Sale
Share:
Description
• Django Reinhardt, the father of all jazz guitarists, the great inspirer who has fascinated countless players from across the whole spectrum of popular and classical styles; from Jerry Garcia to Hank Marvin, from Julian Bream to Chet Atkins. No jazz musician can surely ever have expressed themselves more eloquently than Django. The nuances and breathtaking sophistications of his playing style have obvious cinematic potential and Woody Allen and Louis Malle are among the directors who have made use of his music in their films.
• Stardust Memories was released at the height of Woody Allen’s popularity, a controversial film made in the wake of Annie Hall and Manhattan, the triumphs that brought the director global recognition. A homage, at least in part, to Fellini’s Eight and A Half, it is a film about filmmaking, its absurdities and its relation to real life. Django’s music is central in a historic jazz score. Woody has described Stardust Memories as “The best film I ever did… the closest I’ve come to achieving what I set out to achieve.”
• Two decades later Woody Allen would pay tribute to the jazz guitar with Sweet and Lowdown, a re-working of a project entitled Jazz Baby that he had written, and shelved, thirty years earlier. Sean Penn plays the flawed Emmet Ray, by his own admission, the second best jazz guitarist in the world behind Django, whom he worships.
• Our edition features the three Django recordings used in the film combined with the Django readings of compositions performed in the movie – in period style – by Howard Alden.
• Lacombe, Lucien is Louis Malle’s gem of a film about French collaborators during the second world war. Django Reinhardt’s music is used almost exclusively and to great effect; combining the very ‘up’ pre-war recordings the guitarist made with Stéphane Grappelli, with the readings made during the 1940s with a clarinet player, which help evoke the dark mood of occupation.
N.B. This title is released 20th April and will not be dispatched before this date.