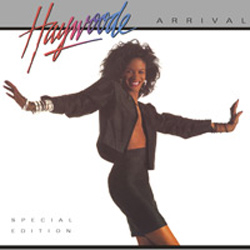 Released on 22/02/10. London-born Sidney Haywoode trained from an early age at London’s prestigious Corona Stage Academy and was signed by CBS in 1983, following numerous acting, singing, dancing and modelling roles in the West End, in films and on TV.

Debut single, ‘A Time Like This’, reached the Top 5 in the US Hot Dance Club Play Chart and immediately established her distinctive brand of spirited, soulful funk/pop. Via a succession of singles – including two forgotten gems by then-little-known underground dance producers Stock, Aitken & Waterman, ‘You’d Better Not Fool Around’ and ‘Getting Closer’ (covered later by Kylie) – full international chart success finally struck for Haywoode with ‘Roses’ in July 1986.

The long-awaited ‘Arrival’ album was finally unveiled, showcasing new tracks including Haywoode’s take on Prince’s debut hit ‘I Wanna Be Your Lover’. The album soon became a much-sought-after ‘lost classic’ of the era, with CDs from Japan (the only territory releasing the format beyond vinyl and cassette) still regularly fetching ridiculous prices on eBay.

Included with this full-to-capacity 17-track digitally-remastered Special Edition CD are 7 Bonus tracks plus a comprehensive colour booklet of pictures, analysis, photo discography, lyrics and exclusive brand new interviews with Haywoode herself and those involved with her career.

Happy Being Lonely / The Fantastic Chi-Lites