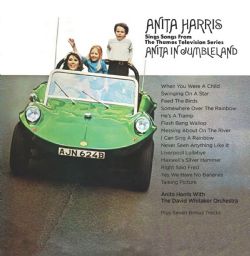 • The first time ever that Anita Harris’ final album for CBS has been released on CD. This expanded edition of the long deleted 1970 album also includes all seven of the non-album singles / ‘B’ sides from the end of her CBS tenure, giving the definitive insight into the closing chapter of one of the most successful, yet often overlooked, British girl singers of the 1960’s.

• ‘Anita In Jumbleland’ was also the name of a long lost music led children’s television programme starring, and co-produced by, Anita Harris. Set in a junkyard with a magic piano that played itself, Anita would weave stories with her child co-stars through well-known songs including those on this album. The album provides a soundtrack to a classic and popular television programme but also, in its unique and joyously upbeat take on much loved songbook classics, it provides a stand-alone masterclass on the nuances of the art of dramatic singing. The sleeve also features her co-stars and her magical colour and size changing, flight enabled car ‘Nittybug’.
• This album was made with one of the leading orchestras of the time, the David Whitaker Orchestra, who had a long time association with both Anita and her manager / producer Mike Margolis.
Please Note: This title is released 26th January 2015 and will not be dispatched until this date.
TRACK LISTING:
1. WHEN YOU WERE A CHILD
2. SWINGING ON A STAR
3. FEED THE BIRDS
4. SOMEWHERE OVER THE RAINBOW
5. HE’S A TRAMP
6. FLASH, BANG, WALLOP
7. MESSING ABOUT ON THE RIVER
8. I CAN SING A RAINBOW
9. NEVER SEEN ANYTHING LIKE IT
10. LIVERPOOL LULLABYE
11. MAXWELL’S SILVER HAMMER
12. RIGHT SAID FRED
13. YES WE HAVE NO BANANAS
14. TALKING PICTURE
BONUS TRACKS
15. JUMBLELAND
16. LATE NIGHT FINAL
17. I’LL NEVER FALL IN LOVE AGAIN
18. LOVE IS EVERYWHERE
19. LOVING YOU
20. FERDINAND AND HIS ONE MAN BAND
21. THE ONLY ONE TO LOVE ME
Additional information
Tracklist
Track listing as above.
Reviews (0)