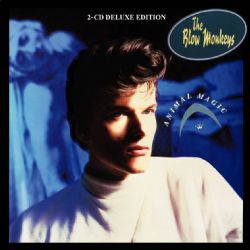 SKU: CDBRED543
Categories: 10.95, Cherry Red Records, Cherry Red Sale, Physical, Sitewide Sale
Share:
Description
THE BLOW MONKEYS were formed in the early 1980s by singer and
songwriter Robert Howard (stage name: Dr. Robert).
Combining the glamour of Roxy Music with the energy of post-punk, the
sophistication of nu-jazz and the vocal and melodic stylings of Marc Bolan and
T. Rex, THE BLOW MONKEYS signed to RCA Records in 1984.
Second album ANIMAL MAGIC from 1986 gave them their breakthrough, as the
worldwide hit single ‘Digging Your Scene’ was on permanent radio rotation.
This deluxe edition of ANIMAL MAGIC has now finally been re-mastered
from the original tapes.
It boasts all of THE BLOW MONKEYS’ non-album B-sides, including their
trademark live cover of Curtis Mayfield’s ‘Superfly’.
In addition, this 2012 edition boasts six previously unissued demos and
recordings created by the band during the sessions for the album, including the
otherwise unheard Dr. Robert song ‘Guess I Love Her Now’.

Also unveiled is the original recording of ‘Digging Your Scene’ without
the Linn drums.