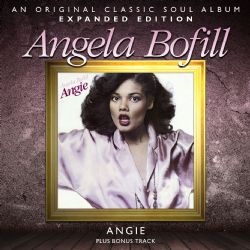 Released in 1978, ANGIE was the auspicious debut album by singer/songwriter Angela Bofill, marking the arrival of a distinctive and unique artist who has built a solid following among soul and jazz connoisseurs worldwide ever since.

The Bronx, New York-born artist worked in a variety of different artists including jazz greats Dizzy Gillespie and Cannonball Adderley and disco group Ecstasy, Passion & Pain as well as singing with The Dance Theater Of Harlem before landing her record deal with GRP Records, the label founded by key jazz producers Dave Grusin and Larry Rosen.

Grusin & Rosen masterminded the production of ANGIE, pulling together an amazing group of star players for the sessions including drummers Buddy Williams and Steve Gadd, bassist Francisco Centeno, percussionist Ralph MacDonald, guitarist Eric Gale, Grusin himself on keyboards and GRP labelmate/flautist Dave Valentin (who facilitated Angela’s introduction to the label).

ANGIE received immediate acclaim for press, radio and public in the US, reaching No. 5 on Billboard’s jazz charts, No. 20 on the R&B charts and No. 47 on the Top 200 album charts. The single, “This Time I’ll Be Sweeter” (included here on this expanded edition reissue) was also a Top 30 R&B hit establishing Angela as a staple soul/jazz artist.

Notice: id was called incorrectly. Product properties should not be accessed directly. Backtrace: require('wp-blog-header.php'), require_once('wp-includes/template-loader.php'), include('/themes/xstore/woocommerce/single-product.php'), wc_get_template_part, load_template, require('/themes/xstore/woocommerce/content-single-product.php'), do_action('woocommerce_after_single_product_summary'), WP_Hook->do_action, WP_Hook->apply_filters, woocommerce_output_product_data_tabs, wc_get_template, include('/themes/xstore/woocommerce/single-product/tabs/tabs.php'), wpb_new_product_tab_content, WC_Abstract_Legacy_Product->__get, wc_doing_it_wrong Please see Debugging in WordPress for more information. (This message was added in version 3.0.) in /home/cherryredco/public_html/wp-includes/functions.php on line 4986
Under The Moon And Over The Sky / This Time I'll Be Sweeter / Baby, I Need Your Love / Rough Times / The Only Thing I Would Wish For / Summer Days / Share Your World / Children Of The World United / Bonus Track -This Time I'll Be Sweeter (Us Single)